In these ‘Behind the Shot‘ posts I take one of the pictures I shot from an event and go into a little more detail about how I got the shot and what the thought process might have been in the build up to taking it as well as some of the more technical aspects of taking the picture and what went right or what went wrong.

The shot below was a shot I took of the Tour de Yorkshire Peloton climbing the Cote de Park Rash ascent on Stage 4 of the race. 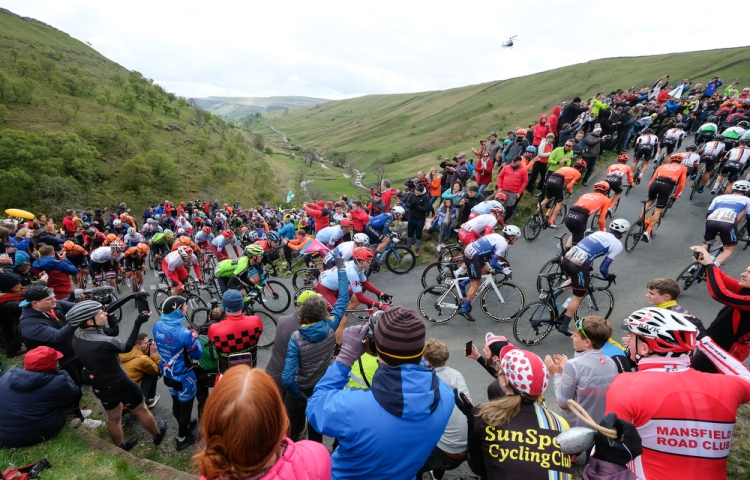 The Park Rash ascent climbs for a little over 2 kilometres out of the village of Kettlewell in North Yorkshire gaining 230 metres in height over that length. The most interesting feature of this climb in my opinion is the first tight hairpin bend about a third of the way up the hill where the gradient reaches 25% at the hairpin.

Positioning myself on the hairpin I knew that if I could get back enough and get high enough then I would get the full hairpin in the frame with cheering crowds either side of the road and with a large peloton filling the road it could look quite dramatic. If the race helicopter happened to be around at the same time then that would be a bonus.

Shooting with the Fuji X series cameras (X Pro 2 in this case) the user has an option to fire the camera remotely from an app on the phone. The app allows you to view on your phone what your lens is seeing and exposure adjustments can be made so my plan ‘A’ was to cover the race for as long as I could on a longer lens and camera before swapping to my wide lens on the other camera that was placed on a monopod that I would then lift up high above me and fire the camera using the app.

With me so far…? Ok, so after numerous test shots as I waited – including the one below taken as we were all waiting for the riders to arrive – it looked like a good plan and the view I was able to get was really good so I was looking forward to trying for the shot once the crowds built and once the riders arrived. 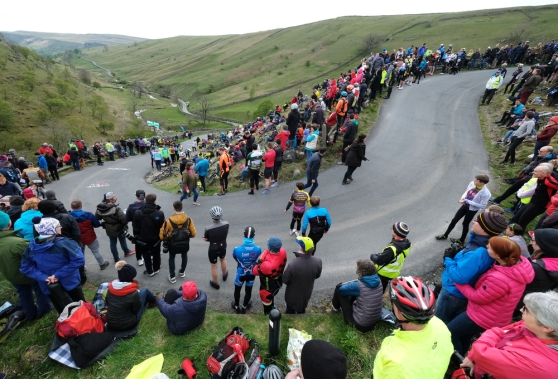 As with these things I like to have a plan ‘A’ but I also like to have a Plan ‘B’ and ‘C’…just in case. Probably a plan ‘D’ also because once things start happening if something goes wrong then there isn’t usually time to re-assess the whole thing so you need to have something in place already so you can immediately switch to it.

Cycling is a good example of the fleeting nature of some subjects because the peloton passes so quickly – even if they are climbing up a steep hill – and once they’re gone…they’re gone. So it’s one go at it.

Having tried this approach before on other jobs I was concerned that I would either lose my already dodgy connection between the camera and the phone app which was dropping in and out on the remote hillside or that it might freeze out while it was open and in my pocket because I wouldn’t have time to take the phone out and open the app and connect as it would take too long so it needed to be left ‘on’ and if it froze while I was shooting the approaching peloton in the meantime then it would make it unusable when the time came.

Unfortunately in this case this is what happened. As I finished shooting the riders approaching through the valley to the bottom of the climb and beginning their climb I switched to my wide lens on the monopod and looking at the app I saw ‘connection is lost’ written across the app. So my plan ‘A’ was scuppered!

Whilst muttering some very choice words to myself I immediately moved a little over to my right where I had seen earlier that there was a rock and standing on that I shot what is commonly known as a ‘Hail Mary’!

This is essentially raising the camera up as high as you can above your head and whilst pointing in the general direction you shoot your pictures without really knowing how it will be composed. It’s all bit hit and miss but with knowledge of the angle of view the lens covers and knowing the exposure and settings you need the odds head a little more in your favour and in this case I’d had more than enough time to work it all out in advance.

This shot was the result. It isn’t as wide as my initial planned shot would have been where as you can see in the test shot all the hairpin can be seen in its entirety but it still works I think and tells the story of a difficult hillclimb, a busy peloton of riders, enthusiastic crowds and it puts it right into the amazing countryside of North Yorkshire – and my helicopter even made an appearance!

This is just one way of doing it of course. I could have shot it in a few different ways and using a stepladder would’ve been a good option and that was one which was employed by a couple of colleagues including Simon Hulme from the Yorkshire Post who was also shooting from the same place but I really wanted to try to make the monopod shot work just to try and get a different view from as even higher viewpoint.

Sometimes that works and sometimes it doesn’t but it’s worth a shot as long as you know you can get something even if the initial plan falls apart.

So all been said I’m happy. Well reasonably happy…photographers are ever totally happy of course but it makes a decent picture.

Prints are available to buy through the secure online ordering process.