In a show of support for military personnel working in Afghanistan the British Prime Minister, David Cameron, visits troops based at Camp Bastion in Helmand Province, Afghanistan. During his visit he also announced an increase in the ‘operational allowance’ paid to military personnel on operational deployments – news that was very welcome to troops listening to his address!

Photographing a high profile visit like this is always challenging for a number of reasons. When a high profile visitor comes they are inevitably surrounded by a gaggle of other media, personal assistants, close protection officers and other people hanging on who you need to work around. Time is always tight and the PM’s movement between various locations he was visiting is controlled tightly so you need to know exactly where and when he is going so that you can try and get to the next location before he gets there. There is a programme released outlining the visit and this is a good starter but its always worth checking through the day to see if it remains current. One of the things I do is check in with the drivers of the vehicles taking the PM to each of the locations as they will know of any last minute changes in his plans. In this case it paid off as a couple of visits were swapped around and if I had not asked the driver I wouldn’t have known.

Finding out the running route the PM was to use on his early morning jog is a requirement for obvious reasons, if possible recce it to try and spot good locations to get to before he runs, in this case he started and finished in the same place so I wanted to find two locations within east reach of the start point from which I could get to easily and quickly in order to photograph him starting and as he ran down the final leg of the run to give me a bit of variation.

After a short break after the run it was onto breakfast with the troops. It’s never going to be a great shot of anyone sitting down to eat, doesn’t matter who they are! So a couple of quick pictures as he sits and chats with the troops is all that is required and then leave them alone to eat and after grabbing a quick sausage sandwich while they eat it’s on to the next location.

The key address to the troops was a busy and hectic affair in the minutes leading up to his arrival – as they always are. His people are trying to orchestrate the best positions for the media to get their message across, the media is trying to get into the better locations for their coverage, the military is trying to organise everything as only the military can – A Sergeant Major shouts a lot and tries to get a crowd of a couple of hundred to do the same thing which is never going to be easy…and in amongst all this with the heat in Bastion and the dust rising up from the shuffling of boots on the dirt your trying to work out your best location, where is the sun? How close can I or should I get? I knew there were other photographers shooting from behind the crowds so I decided to go in close and was able to stand right at the foot of the small platform he was to stand on and shoot it on a 24mm hoping I could get some of his hand gestures as he emphasised his points to the onlookers.

The shot at the top of the post is my favourite as this tells the story of his speech to the troops and his visit best I think. I know he is animated when public speaking and the hand gestures he uses are the same as he uses when speaking in Parliament so I knew he would definitely use them – What lesson from this? Research your VIP to see if they have any traits or characteristics you can keep an eye out for. I positioned myself slightly behind him as I wanted to try and get the animation as he turned and spoke to the crowd. 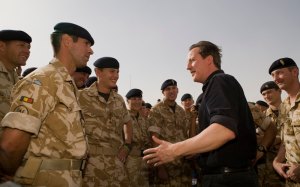 And so it continues through the visit, leapfrogging from location to location as the temperatures soared trying to get into position to cover the arrivals at each location and the subsequent meet and greet with people. Trying to work on interesting pictures and look for something different that tells the story.

It is hard work, but I enjoy the buzz of having to work fast and keep looking for the pictures in such a fluid and unpredictable situation, followed with the race to edit and get the pictures ready to file to the news agencies.

Press and Documentary photographer covering the North of England. Stringer & contributor for Getty Images News. Prints are available to buy on my website.
Previous Post
Next Post