Skip to content
The South Gare breakwater at the mouth of the River Tees was built in the 1800’s and took 24 years to complete. Made from around 5 million tons of ‘slag’, the waste product from the Teesside blast furnace, and 18,000 tons of concrete it stretches for two and a half miles out from the mouth of the River Tees offering protection from the fury of the North Sea.
Along this man made peninsular within the Tees estuary there is a wealth of natural beauty mixed with a traditional fishing industry and both seem to exist side by side maintaining a way of life, that for the time being at least, share a rich heritage. It is however, a way of life that is in decline, caused partly by the gradual reduction of the fish stocks in the North Sea but mainly as a result of the restrictions in fishing quotas placed on the local fishing fleet. 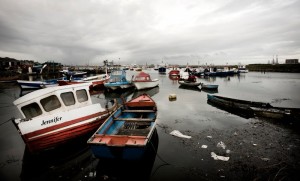 For well over twenty years the members of the South Gare Fisherman’s Association have been leasing a group of small, single room huts from Corus steel, who own the land. The huts, made of proper timber, such as shiplap, are for the most well treated and all are painted a rich dark green in colour. Despite the salty air and harsh environment they can last between 20 and 30 years.

Traditionally used to store equipment for the people who dig for bait in the sands or to store and repair fishing equipment the huts are now part useful and part recreational. They offer a ‘bolt-hole’ for an exclusive club of men – Tradition has it that many years ago, a group of fishermen approached the land owner at that time, Lord Zetland, and asked for his permission to build the huts. He agreed but on the condition that they were painted green, to blend in with the surroundings and that no women were allowed on the site of the huts between 8pm and dawn. To this day this condition remains in force and women are not allowed to stay overnight. 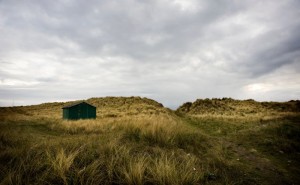 Tucked neatly into a low lying area of the peninsular and surrounded by the dunes on three sides the 101 huts are a landmark on this part of the coast. Whilst there is no electricity supply some huts are equipped with battery powered generators which can run a TV and radio and there is a water supply available in the toilet block. 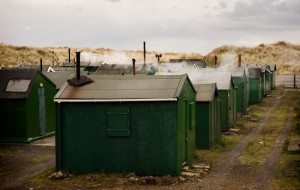 For heating the majority have coal or wood stoves fitted inside with the most popular choice of fuel being sea coal gathered from the beach, once dried it is wrapped inside newspaper and placed in the fire filling the huts with a smokey aroma that anyone who as ever had a coal fire will immediately recognise. It is a great smell. 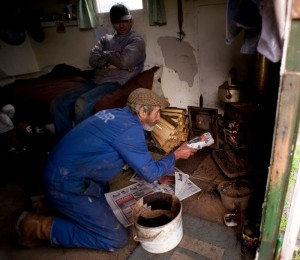 Many of the owners spend much of the time at the huts – some to constantly keep on top of maintenance of their fishing equipment, others to avoid the wife! Either way they help keep a way of life flourishing that has been here on the coast of Cleveland for many years and some of the huts are fitted out with kitchens, beds, couches and the walls are hung with many different objects depending on the taste of the owner.

Below are some of the photographs from the small fishing port known as Paddy’s Hole where the fishing boats situated on the Gare peninsula work from. The boats here are numerous but there are only about eight that remain as full-time professional fishing boats with the rest used for occasional fishing or leisure use.

Many lie in such a bad state of repair that they will never put to sea again, others remain barely used and are slowly succumbing to the harsh weather. Those that are used are looked after with great care to keep them ready for when they put to sea in search of Cod, Bass, Haddock, Herring and Whiting but the financial reward for the fishermen gets lower all the time with the average payment to the fisherman being less than a third, per fish, what you pay from a fishmongers or supermarket. 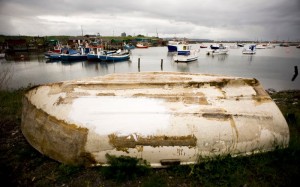 One of the steadier sources of income not as affected by the fishing quotas is lobster fishing, with hundreds of lobster pots stacked on the bank side next to Paddy’s hole waiting for their owners to sort and take out to sea. This provides little reassurance to a community struggling to survive. Along with the closure of the main employer in this region – The Steel industry at Corus – many feel that their options are becoming more limited and their futures are becoming increasingly more uncertain.

I have a larger project planned documenting the people who work in the fishing industry out of Paddy’s hole at the Gare, the huts they own, the stories they have and the worries they all their share for a future in the balance.
With thanks to the fisherman of the Gare for their hospitality during this shoot – and their stories.
Further pictures from this shoot can be seen on my Flickr site…http://www.flickr.com/photos/ian_forsyth/sets/72157623990123102/  or at my website…http://www.ianforsythphotographer.com/portfolio/?level=album&id=2

One thought on “Green huts and Lobster pots”