After a heads up from a friend I headed down to Grangetown near Middlebrough in Cleveland earlier this afternoon, the place is about a twenty minute drive from where I live, to try and shoot some photos of a young bloke who had, according to the reports, climbed onto a roof armed with a knife and was throwing slates and tiles at the surrounding onlookers

According to members of the public at the scene he had climbed onto the roof in protest against police harassment although this was unconfirmed. The police had cordoned off the scene for obvious reasons and were playing a waiting game, reluctant to try and force the man, known locally as ‘Little Jack’, from the roof in case he, or others were injured in the process.

The man eventually climbed down from the roof after three and a half hours and was arrested by police and charged with criminal damage. 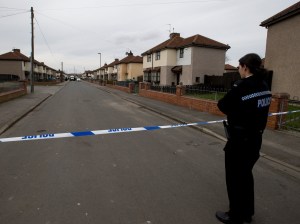 A police officer looks on from the cordon 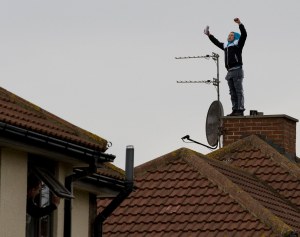 The youth, watched by a neighbour, raises his arms and shouts at onlookers 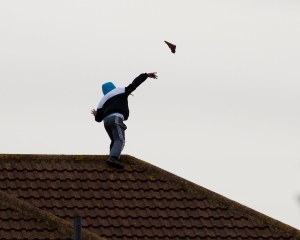 The youth, known as ‘Little Jack’, throws a piece of tile from the roof 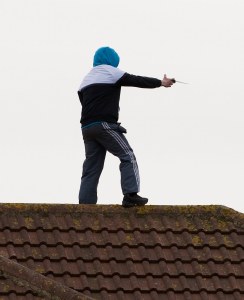 Knife in hand he gestures from the roof

He climbs onto the chinmey stack

Press and Documentary photographer covering the North of England. Stringer & contributor for Getty Images News. Prints are available to buy on my website. View all posts by ian forsyth photography