Skip to content
Just back from Edinburgh and even though it was out of the main holiday season and there was bad weather pretty much every day, there was still plenty to shoot  – at least when you’re not in the pub!
As mentioned before in other posts, when visiting places like this or just shooting generally, I think travelling light is the order of the day leaving you free to wander round unhindered. I was using my primes as usual – I had a 20mm 2.8, a 50mm 1.8 and an 85mm 1.4, a couple of D3’s and that was pretty much it.

Edinburgh Castle
Despite recent problems about shooting photographs in public places and how panic stricken the police, public officials and members of the public become as soon as you raise a camera to your eye it was refreshing to find that I didn’t encounter any of this in Edinburgh. Probably because it is such a popular tourist location and as such photography is very common, so one more person with a camera didn’t raise any concerns.

National Scottish Gallery
If I had been there in the height of the season or if the ‘Fringe Festival’ was running then pictures would be everywhere but you have to go with what you have and it’s part of the challenge to keep your eyes open to the pictures that you pass, it develops your eye and that can’t be a bad thing. From busts in the Scottish Museum to homeless guys on the street. 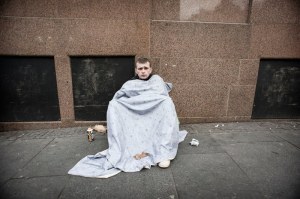 Homeless man on Edinburgh street
There were a lot of homeless people on the streets and some people find photographing them to be intimidating but I find if you go about it in the right way then you have fewer problems. I don’t mind at all giving them a couple of quid but I always offer it so they can buy a brew or something rather than a payment for pictures. As long as you don’t patronise them and you ask if they mind having their photo taken then your generally going to be alright and after I have done shooting I don’t mind staying around to have a chat for a few minutes.

International newsagents
This International Newsagents caught my eye simply because of the huge variety of newspapers from all over the world and in many different languages that were on display outside the shop but I had to wait with this picture framed until someone walked out of the shop with a paper in hand to bring it together.

Scottish War Memorial
The Scottish War Memorial inside Edinburgh Castle was a quiet and austere room in which all the usual trimmings telling of military sacrifice were visible. The above picture of one of the carved walls was taken at 2000 ISO in a very dark corner of the room, amazing results from the D3 and something I could never have done with my D2x! 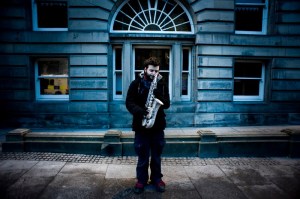 Busker on the street in early evening
This street entertainer was one of only a very few this time although I can imagine that in the height of the summer every corner will be occupied, another shot taken in low light and once again these guys are more than happy to have their pictures taken – he was actually really good aswell. 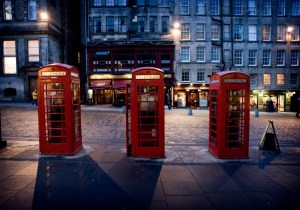 Man on his mobile 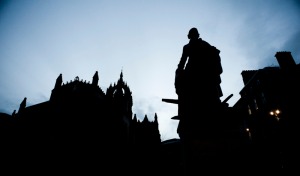 Statue of Adam Smith
Adam Smith was a Scottish moral philosopher and a pioneer of political economics. He was one of the key figures of the ‘Scottish Enlightenment’ and the author of a number of books on economics namely ‘The Wealth of Nations’. He is widely regarded as the father of modern economics. Now in case your astounded with my knowledge of Scottish economics thinking I am a font of knowledge on the subject I have to confess that I knicked this info from Wikipidia, but a bit of background info never hurts. It’s good for the captions. 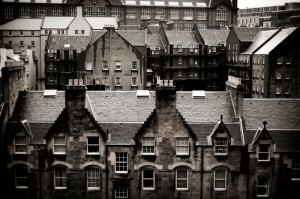 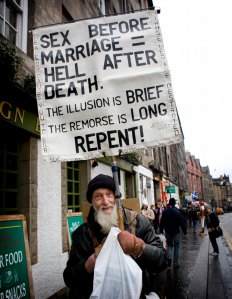 This guy was walking along with his placard and a picture just had to be taken, he wouldn’t let me get away without asking me…”Where are you from….?”, I replied with, roughly, where I live, but then, fixing me with a stern gaze he asked me in a very serious tone… “BUT, where are you going?” and pointed to his placard!
Ah well, at least I know.