One can only imagine what the family members of soldiers who are killed on operations in places like Afghanistan are going through as they wait inside the large white tent erected next to the terminal building at RAF Lyneham in Wiltshire. As the massive C17 aircraft slowly comes to a halt in front of them, the turbines wind down and as the hydraulic ramp at the rear of the aircraft is lowered, silence descends. 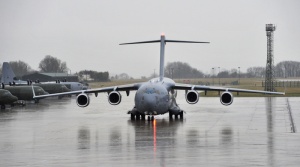 The bearer party make their way down the ramp onto the wet tarmac, the flag draped coffin is saluted, and away to one side the Last Post is played by a lone bugler as they begin the slow, dignified procession to the hearse.

Carried towards the open rear door of the hearse the bearer party remain steady. Unwavering in their task. Regardless of the weather or the conditions they carry their comrade to the waiting vehicle. As the rear door closes, they wait silently, standing to attention as the hearse pulls off and is slowly driven away. This is the process each time a soldier is repatriated. A dignified and faultless process that happens each and every time, regardless of rank or regiment.

As a photographer for the Army one of the tasks we undertake is to photograph each of these repatriation services. We capture the whole service from start to finish from a position on the roof of the terminal building. For each repatriation that we photograph we have three main outlets for the images we make. We file images to the civilian press, we subsequently create a CD of the images that is passed to the family and all of the photographs are eventually sent to the Imperial War Museum in London to form part of a permanent photographic archive.

It should go without saying that you have to get it right, each time, every time, regardless of weather or the conditions you have to try and make the best pictures that you can – for all the reasons mentioned above and because as a professional you want it to be right. Even though each repatriation follows the same process it would be foolish to become blase about it, each time requires total concentration to get the pictures and the awareness to see a picture that might be a little different. 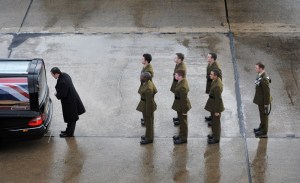 You can almost feel the grief in the air sometimes, rising up from the white tent, but you have to put any feelings you have to one side, you can deal with them later in your own way but hopefully, eventually, the pictures will provide some comfort to the family and will go towards providing a lasting memorial to the soldiers killed on deployment.

2 thoughts on “The White Tent”