Browsing through an old archive of mine recently I came across some photographs I had taken in Kosovo in 1999. I had shot them on film, I don’t remember what type, and subsequently scanned the images onto my computer at a later stage….

In the Spring of 1999 NATO resorted to military action to force the Serbs, under the leadership of Slobodan Milosevic, to withdraw from Kosovo and stop the violence against the Kosovar Albanians. An air campaign began in March 1999 and lasted for 74 days followed quickly by ground troops entering across the border with Macedonia to ensure the withdrawal of Serbian forces following their signing of the UN-approved peace agreement on June 9.

A Serb T-55 tank in a village in Kosovo

A shallow grave in a garden of a house in a small village in Kosovo contains the body of a man, his wife and his sister 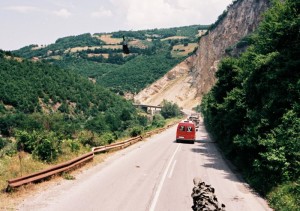 Armoured vehicles and a Chinook helicopter move through a steep sided valley as they enter Kosovo. A vehicle with a TV crew joins the convoy.

Kosovar Albanian refugees sit outside a tent erected in a refugee camp on the border. They were among many thousands forced to flee from the fighting and from persecution by the Serb forces during the conflict

Waiting for food and water at the refugee camp 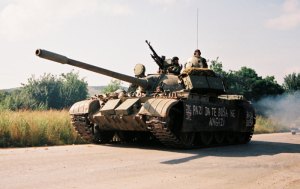 A Serb T-55 tank drives down a road as it makes it’s way back to the border following the peace agreement.

A cheeky grin on the face of a young Kosovar 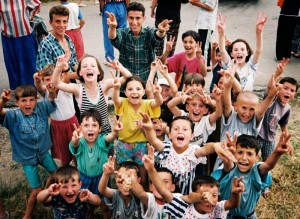 A group of smiling and cheering Kosovar children react to the camera during a stop in a small village in Kosovo.