Former soldier Harry is a veteran of Burma and India at the end of the second World War, after being called up for service in February 1944 when he was 17 he set sail from Scotland and sailed to India on the SS Orion, arriving in Bombay over a month later. “It took us ages to get there, because of the threat from U-boats we had to zig–zag all the way there” said Harry.

As one of the first former servicemen to take part in my ‘After the Silence’ project, Harry kindly agreed to meet up with me and let me take some pictures and share some stories about his time in India, a keen photographer, then and now, he still keeps many of his old negatives in his home and in the picture above he proudly showed me his favourite photograph from that time of an Indian beggar whose picture he took on a street in India.

More of Harry’s adventures will appear later as the project grows in size, and the hope is to also produce a multimedia piece featuring many of the ex-servicemen. 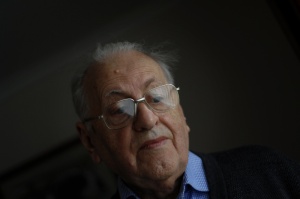 This project is still ongoing so if you are an ex-serviceman or woman from any conflict from any time and want to get involved in this project then get in touch and we can discuss the details..

My contact details if you want to get involved with this project or if you know somebody who might like to you can email me at….. ianforsyth2003@yahoo.co.uk