When I’m out on a job, either my normal work as a photographer for the Army or when I’m doing shifts for a local paper (…in my own time in case my boss reads this!!) I try and keep my eyes open for other picture opportunities that I might come across when out on other jobs.

You never know, it might lead to another story, or something more interesting or simply allows you to ‘keep your photographic eye in’.

In this case I was in Newcastle the other week doing a shift for a local newspaper. While out getting pictures for one of their regular pieces in the paper there were a couple of events taking place in the Grey’s monument area of the town that I stopped and photographed.. 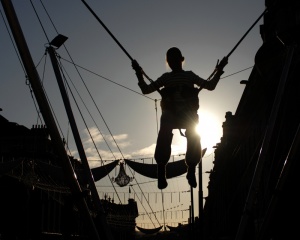 …in the same area, about 20 metres away, there was a bungee trampoline contraption set up which allowed members of the public to get harnessed in and have a go on the trampoline.

I thought it a bit of a surreal mix – Fighting global capitalism on the one side and bouncing on a trampoline next to it.

Keep your eyes open – there’s always something to photograph.